There is a lot of misinformation out there, so I am going to work on a guide to help answer some questions about vintage Coach products. A lot of information gets lost with time, and even Coach couldn't answer some of the questions I had when I began my collection.

At the bottom of the page is a list of style numbers and names of most of the bags that have such a thing, of course style numbers were not assigned until 1994. The style number is the last four or five numbers after the dash in any Coach serial number made 1994 or later. Actually, that is incorrect, thank you very much BeenBurned from The Purse Forum for the following:

I am going to go from newest to oldest, and showing as much information as I can. I am then going to ask some experts from the Purse Forums to correct any mistakes I might have made. Hopefully this guide will be helpful and useful.

This bag is from summer 2011, and was actually made in February 2011. It says "Handcrafted in China", which is where most Coach bags are made today. The serial number can be decoded on any Coach bag made from 1994 on. The first letter is the month, in order from A for January, all the way through M for December, skipping I for clarity because I was too easy to mistake for 1. The second number is the year the bag was made, 4 for 1994, 3 for 2003, and 04 for 2004, with double numbers being used for every year after 2004. The third or fourth number in the creed is the factory designation number. I don't think Coach has ever released a list of these numbers and what they stand for to the public. 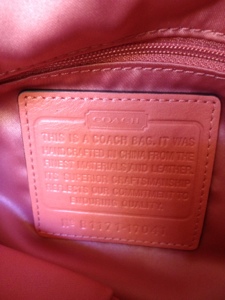 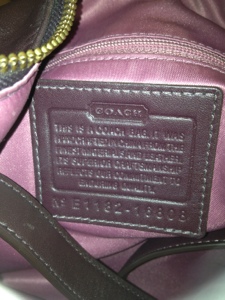 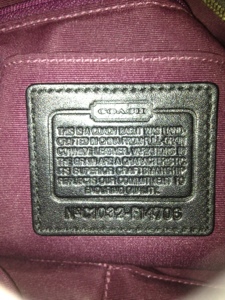 This bag was made in October of 2003. It was handcrafted in the United States. 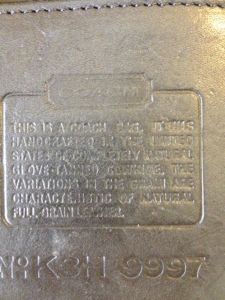 This bag was made in October of 2000. It was made in the United States, in one of several factories operating at the time. 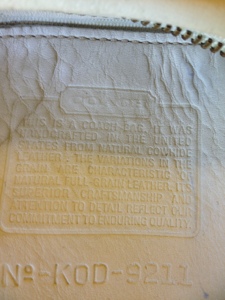 This bag was made in February of 1998. It was also made in the United States. 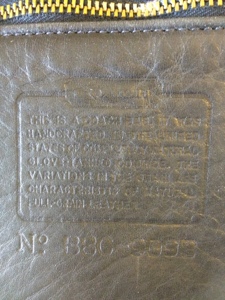 This bag was made in March of 1997. Also made in the United States. 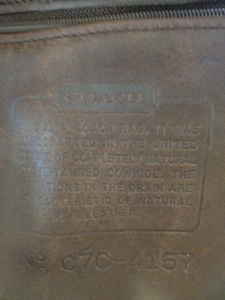 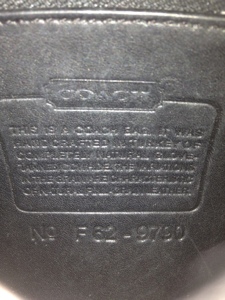 This bag was made in the United States, but it was made prior to the implementation of the orderly and meaningful creed serial number system that was created by Coach in 1994. Notice that it says "Made in the United States", but it says it under the creed instead of up in the middle of the creed like all the others. There is a number under the creed, but the number is individual for each bag made by Coach during this time, and cannot be deciphered. This bag was created in a factory in the United States, after Coach had expanded outside of New York City to meet a growing demand for the bags that simply could not be accommodated by the factory in New York.
Notice that underneath the word Coach, it says "LEATHERWARE" in tiny block letters. The tag from this bag will also say "LEATHERWARE" underneath. This bag dates anytime prior to 1994, and after the implementation of the creed stamp in the 1970's. 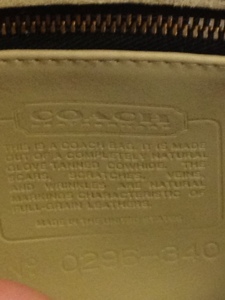 These bags are referred to as "New York City" bags, they were made in the original Coach factory in New York City. That factory operated from the late 1960s through the mid 1980's. Notice the "LEATHERWARE" in tiny block letters underneath the word Coach at the top of the creed. 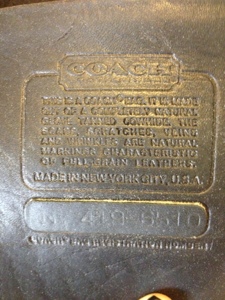 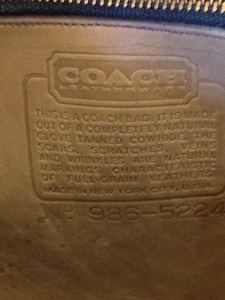 This bag with the leather stamp inside but no creed is actually the same style of bag as the black bag above from New York City. This bag was made prior to the time when Coach adopted a creed, and prior to the time when they had serial numbers inside the bags, yet after the Coach metal tag from below, placing it late 1960's, early 1970's. 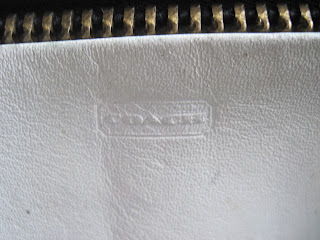 This bag with the metal tag is from the 1960's, it was made before Coach had a creed, and is considered to be one of the earliest bags made by the Coach company. 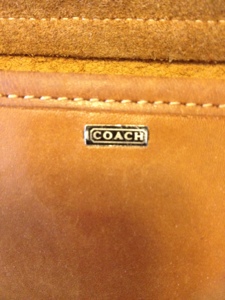